Mount Rushmore, where the faces of four U.S. presidents are carved in granite

Picturesque and serene Sylvan Lake in the Black Hills

Where a rugged landscape surrounds charm and culture

While Rapid City is best known for its proximity to national parks and enormous mountain carvings, including Mount Rushmore just 40 kilometers away, visitors to the heart of this Black Hills destination will be enthralled by a plethora of outdoor adventures, a charming and historic downtown and a salute to American Indian heritage in southwestern South Dakota.

No trip here would be complete without seeing the heads of four U.S. presidents, each about 18 meters tall, carved into granite on the side of Mount Rushmore.  Once there, you’ll see why the sculpture, which took 14 years to complete, attracts nearly 3 million people a year. Nearby, work continues in the Black Hills on another mountain carving, this one of the famous Lakota warrior Crazy Horse astride his horse, that will become the world’s largest sculpture upon completion. The memorial serves to preserve the culture of North American Indians.

Find out more about the area at The Journey Museum & Learning Center, which features exhibits tracing some 2.5 billion years of history, from the earliest rock formations to Native American cultures and Western frontier exploration.

Options are plentiful for people who enjoy outdoor activities like hiking, biking, fishing, kayaking, rock climbing, wildlife viewing and off-the-beaten-path exploration. Traipse through all of those national parks and see a variety of landscapes, including mountains, hills, canyons, valleys, creeks and lakes.

Take in the natural beauty of the Black Hills National Forest and all of its hidden gems, including the Stratobowl clearing that was home base for historic balloon flights. Venture into Custer State Park, where the Wildlife Loop takes visitors through 29 kilometers of hills and grasslands, home to more than 1,300 free-roaming bison. Stop in the Wildlife Station Visitor Center to learn what other types of wildlife you might encounter. Sites along the George S. Mickelson Trail –  a Black Hills rail trail route that is about 175 kilometers long – include tunnels, bridges and 15 trail heads.

A City of Culture

In addition to the prominent Native American arts and culture, Rapid City has become known for its culinary, winery and brewery scene as well as history tied to the original settlers. The Sculpture Project: Passage of Wind and Water is a five-year public art initiative with sculptor Masayuki Nagase working during the summer months to carve by hand granite sculptures in Main Street Square. As you tour the city, look for the City of Presidents, life-size bronze statues of 43 former U.S. presidents, including the famous four that are also on Mount Rushmore.

Comfort is key in Rapid City, which features smaller boutique hotels, larger hotel chains, vacation rentals, camping and bed-and-breakfast establishments. Perhaps you will find a place with a history that includes some of the nation’s presidents.

Rapid City is known as The City of Presidents, a designation earned both by its proximity to Mount Rushmore and the ambitious public art project comprised of 43 life-size bronze presidential statues on street corners throughout downtown.

During the carving of Mount Rushmore National Memorial, a group of local women from Rapid City sewed a 11.8- by 21.3-meter American flag to cover the face of George Washington before it was officially dedicated on July 4, 1934.

An Insider's Guide to Mount Rushmore

Shopping, Dining and Nightlife in Bismarck-Mandan

See the Sandhill Cranes and Other Spectacles in Nebraska 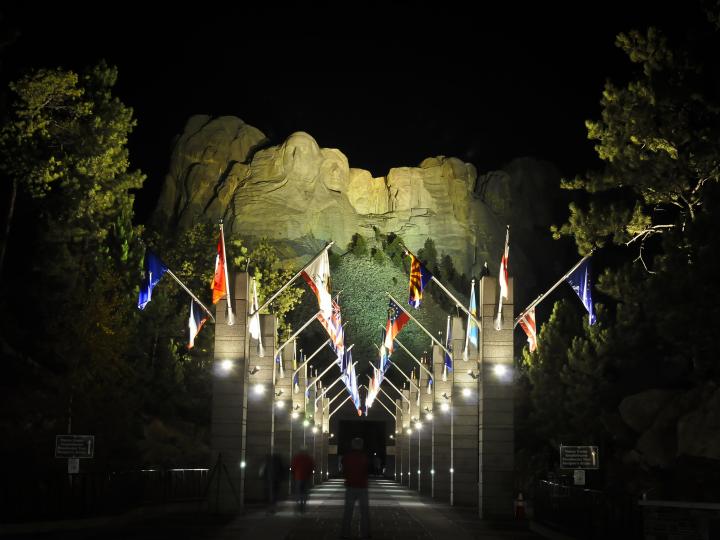